Once again the holiday gift scramble is upon us. We are making our lists, checking them repeatedly and crossing off the expendables. As you go down your list and decide who gets re-gifted mugs, you may stumble upon those few people you dread shopping for this holiday.

What do you buy the person who has read everything? How do you know that they will actually read your gift? Fear not! I have a list to help satisfy all the worms in your life.

The Nerdy Bookworm
The Lord of the Rings, 50th Anniversary Edition
The Hobbit, hobbit-sized edition
eReader Covers
Out of Print Phone Case
Doctor Who: The Visual Dictionary

The “I-Never-Have-Time-to-Read” Worm
A Visit from the Goon Squad by Jennifer Egan
The Girls Guide to Hunting and Fishing by Melissa Bank
A gift membership to Audible.com
Out of Print Tote Bag

The Hipster-worm
Out of Print Coasters
Where’d You Go, Bernadette? by Maria Semple
Love is a Mix Tape by Rob Sheffield
The Art Book: New Edition by Phaidon Press
Vintage/handmade book ends

After your have purchased all of your little wormies their goods, you have to make sure you wrap them up in pretty little packages. Place them under the tree, on the mantle, or hidden deep in the recesses of your closet which you are guarding like Smaug. Then on Christmas, make your grand entrance as though you are the Grand Poobah of the Holiday Season, confident in the knowledge that your gifts are far superior to the rest of your family.

That’s you, the Grand Poobah of Holiday Gift Giving

Armed with this knowledge, “Operation: Last Minute Holiday Scramble” should be a snap. Your giftees will squeal with delight at the sight of your perfectly picked presents and tales of your legendary gifting skills will be sung for decades to come.

I wish you all the best of luck this holiday season, I know that it can be a stressful time for anyone directly involved in the buying of presents! Remember to breathe, get plenty of sleep and don’t stress too much about the fact that you’re in charge of everyone’s happiness.

I really need to update this more, we do so many fun things at the library and I should document them! I have been so busy though! We lost one of our part-time employees and have been training a second, very time consuming.

In the midst of training, however, we had a wonderful story time featuring Robot Zombie Frankenstein by Annette Simon. I paired the book with The Three Little Aliens and the Big Bad Robot by Margaret McNamara and If You’re A Monster and You Know It… by Ed Emberley. All three books were really great and the kids loved them, of course. I always know that any book about pirates, ninjas, robots, monsters (especially zombies) and aliens will do well at story time!

We started off story time by reading Robot Zombie Frankenstein. The kids really listened to this book. I think the combination of bright, vivid illustrations and easy to follow dialogue helped. We talked about what kinds of robots they would build if they had a chance and then I handed out an amazing activity pack from Annette Simon’s website. 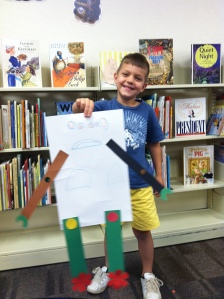 The kids enjoyed doing the packets while I set up for the robot building craft. I had them sit at the table and read them The Three Little Aliens and the Big Bad Robot. They were a little wound up, but eventually calmed down enough to where they were listening well. I then gave them scrap paper (from past projects) and let them create a their own robot/monster/whatevers.

When they had finished their craft, we rounded out the story time by dancing to If You’re a Monster and You Know It… and singing along. Fabulous story time, with fabulous books, by fabulous authors! 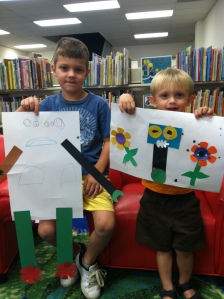 Attack of the Robots!

Error: Twitter did not respond. Please wait a few minutes and refresh this page.

Heard Around the Stacks
Blog at WordPress.com.
Loading Comments...