Recently, I held the “Hunger Games” at the library. I was incredibly excited to host a party for the book series that I loved and the kids were super amped as well. We decided to hold it the day before the movie was to be released, May 22. Most of the kids that showed up to compete in the games were planning on attending the midnight premiere and had read the entire series.

A few months in advance, I visited the Middle School to promote the event. I brought a tri-fold I had decorated with me and handed out lottery tickets I created. 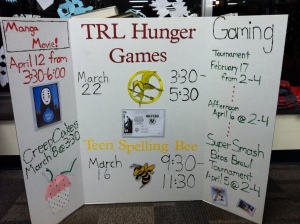 I do one of these 2-3 times a year to promote programs (Spring, Summer, Fall).

The lottery tickets trickled in slowly over the months and I had a few kids pick up tickets they lost. All in all, I’m glad I took the board there a few months in advance. By allowing the kids to plan around the event, I ended up having more kids attend!

I held the event from 3:30-5:30 and I wish I would have had 15-30 more minutes. I had so much planned and getting a little behind caused some stress in the end. The kids still had a blast, but I felt like I was rushing through things and we still went over.

I had twelve (12) kids show up, so I divided them into groups of two by pulling their lottery tickets from a bowl. I assigned each group a District, starting with District 2 and ending with District 6. I then went over the rules for the games and told them what each of their Districts were responsible for.  They liked talking about each of their District’s and seemed to immediately have “District Pride.”

I had them sit around a large table with all kinds of craft supplies in the middle:

The kids were then instructed to make a token to represent each of their Districts and that they would be allowed to wear it in the competition.

It was really neat to see all of the creativity of the kids. The boys from District 4 made fish inspired bracelets, the girls from District 5 made little lightning bolt pins and District 2 made rings with sequins as gemstones. Their explanation was “Well, we’re miners so we would probably find gems while we worked,” which I thought was brilliant.

After each of the kids had created their tokens, they sat in pairs around the table and we started the “Mental Challenge.” This consisted of trivia questions that were broken down into two categories:

Each team was asked 5 questions (possible 14 pts), but they wanted to continue with all the trivia even after the fact. It was here that I spent too much time and ended up rushing. The kids were just having so much fun with the trivia that I didn’t want to blow over it.

After the “Mental Challenge,” I explained what their “Survival Challenge” would be. The object of this challenge was to protect the mockingjay eggs that had collected for food. I explained that they needed to build a structure that would hold the most mockingjay eggs, but that the tallest structure would win ten (10) bonus points.  I had a separate table of building supplies which included:

So many different designs!

The kids came up with some really clever ways to hold their eggs. Some went for height + number of eggs, others just created holding pens: 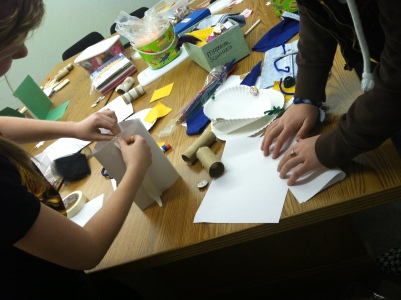 The building challenge proved to be easy for some, but others struggled with the construction of their structure. One of the Districts gave up half way through because they broke their tower (on purpose I believe). District 2 was actually made up of two girls who compete in a science/math/engineering challenge each year (Science Olympiad) and they were folding paper into triangles in order to provide more support for their overall structure! The participants all did a wonderful job and I was so proud of all their hard work. We listened to music while they worked and few of them were dancing around while building, it was a lot of fun. 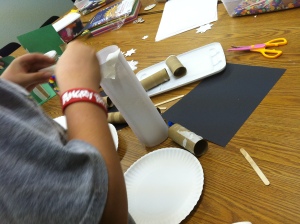 District 4 trying to figure out what will work best.

After they all tried to put as many mockingjay eggs (plastic eggs)  on their structure as possible, we measured for height and totaled each one. The winning team had the shortest structure, but it held the most eggs. There was a bit of a disagreement about what the structure that won was, since a lot of them thought you HAD to build a tower. If you do something similar, I would suggest setting building parameters. 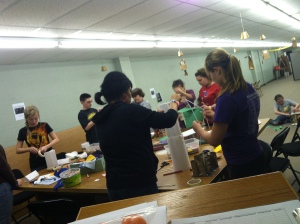 After they built their structures, they needed to fend off some Tracker Jackers that were interested in their food supply. I purchased “throwing knives” (suction cup throwers) and used a Tic-Tac-Throw bean bag game we had in our basement. Instead of X’s and O’s, I taped on Tracker Jackers (X’s) and Nightlock Berries (O’s). The blank side had an image of a silver parachute. The object was to get as many parachutes as possible in 10 throws. If you had more than 4 nightlock berries turned, you died (poisoned) and received zero points. For each Tracker Jacker you turned, you lost one point. The kids had a blast trying to get all the parachutes turned! When all the Districts had gone, they got to try their hand at throwing knives. They aimed for a red plastic target and were awarded 10 points for every throw that stuck for a few seconds. 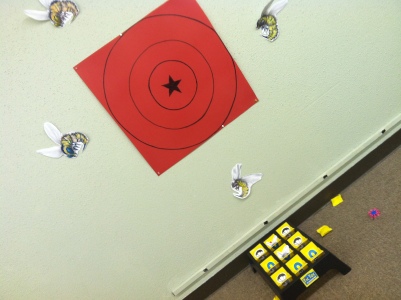 Don't ask me why the photo is all screwy, I don't know why I took it like this.

The Districts were pretty banged and bruised after foraging for eggs, fighting Tracker Jackers and competing against each other. They were sent to the triage unit, where they had to bandage up their teammates. Each team received two rolls of toilet paper, with which they had to heal their partner.

Wrapping up a hurt comrade.

The first team to heal all their partner’s injuries was awarded 15 points. Some of the kids really got into it, drawing stitches and blood stains on the toilet paper bandages.

Finally, their last challenge required a good amount of teamwork. For the “Team Challenge” they had to reassemble a picture of the mockingjay symbol.  To me, this was the most difficult challenge as I had printed the images in black and white. The kids soldiered through , however, and District 2 finished with a HUGE lead.

Each participant was able to take home a “Silver Parachute” which was actually a gold lamp shade (I told them they were limited edition Capitol parachutes) with a goody bag attached. Inside the goody bag, they received a flare (glow stick), energy bites (Jolly Rancher),  Hob Voucher (free book coupon), a handful of misc. candy and a Hunger Games bookmark. I also had a table full of withdrawn YA books that I labeled “The Hob Book Exchange.” Each kid was able to take a free book with them as well.

The goody bags each participant was able to take home!

I thought the program went fabulously and the kids were all excited the next day at school. My mom told me that they were recounting to her the different challenges and how well they had done. I would call that a success!