I really need to update this more, we do so many fun things at the library and I should document them! I have been so busy though! We lost one of our part-time employees and have been training a second, very time consuming.

In the midst of training, however, we had a wonderful story time featuring Robot Zombie Frankenstein by Annette Simon. I paired the book with The Three Little Aliens and the Big Bad Robot by Margaret McNamara and If You’re A Monster and You Know It… by Ed Emberley. All three books were really great and the kids loved them, of course. I always know that any book about pirates, ninjas, robots, monsters (especially zombies) and aliens will do well at story time!

We started off story time by reading Robot Zombie Frankenstein. The kids really listened to this book. I think the combination of bright, vivid illustrations and easy to follow dialogue helped. We talked about what kinds of robots they would build if they had a chance and then I handed out an amazing activity pack from Annette Simon’s website.

The kids enjoyed doing the packets while I set up for the robot building craft. I had them sit at the table and read them The Three Little Aliens and the Big Bad Robot. They were a little wound up, but eventually calmed down enough to where they were listening well. I then gave them scrap paper (from past projects) and let them create a their own robot/monster/whatevers.

When they had finished their craft, we rounded out the story time by dancing to If You’re a Monster and You Know It… and singing along. Fabulous story time, with fabulous books, by fabulous authors! 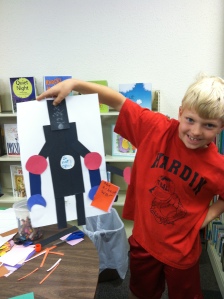 Attack of the Robots!

Before this nasty bit of hot weather, we had a few weeks of glorious spring weather. In celebration of the birds singing and the flowers blooming, I decided we would make spring tree boughs.

The kids loved the craft, especially since they got to use glue and “shiny things.” I thought the craft turned out wonderful, with each of the kids creating a different picture. A few of them made fields of sequin flowers, some made a single branch and a couple made an entire tree.

I chose two wonderful books about spring to read to the kids. The first one is called And Then It’s Spring by Julie Fogliano. I have never read any of her other books, but this one has definitely gotten my attention! 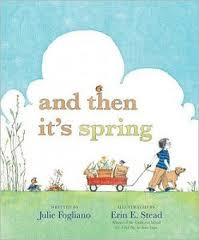 It’s a beautiful book about a boy who plants a garden while there is still “brown” around. Brown grass. Brown leaves. Brown weather. He wonders why his garden isn’t growing throughout the seasons…

And Then It’s Spring…and it’s green all around.

I would definitely recommend this book. The prose is poignant and the illustrations are gorgeous. The story might hit home with adults a bit more than preschool children, but the kids were very attentive and asked questions about the illustrations. Any book that promotes discussion among pre-readers is ok in my book!

The second book that I read was It’s Spring by Samantha Berger. It is a board book, but the rhyming prose is just too cute. The kids had me read it to them twice! The second time they tried to say it with me, which I thought was adorable. The kids really liked the little rabbit and the rhyming goes something like:

” The robin told the rabbit…
The rabbit told the deer…
The deer told the duck…
Then all the birds began to sing
To tell the bears, “Wake up, it’s spring!”

Then it was on to the crafts. The kids sat at different tables and started creating their spring scenes!

The kids getting down to business with their pictures.

I just used some left over blue printer paper, crayons and each child had a small cup of sequins and pieces of tissue paper.

You can see in the picture that each of them created something unique and different! A few of the kids were a bit older and they always seem to try and replicate the example that I give them.

Though I always try to use glue sticks, the sequins don’t really work well with anything beside white glue. The younger kids were THRILLED to get to use the white glue and it was good practice for them since most will be going into kindergarten shortly.

Having a few older kids at this story time was great. They were a big help with the younger ones!

The table of older kids really liked the craft too. I let them do several pictures since they were getting so into it. The creativity of all the kids was really astounding! Even though I had just shown them a picture of a fairly mundane tree bough, their trees had curly branches, sequin birds and falling leaves.

One of the little girls picked out all the pink, clear and white sequins. Her entire tree branch matched the little pink dress she was wearing and when I asked her what her favorite color was she pointed to the pink sequin bird she had made.

I will definitely do this craft again! Maybe a Christmas tree?

After story time, the kids and their parents picked their books for the next two weeks. I always love to see the way the kids interact with their parents when choosing books. It’s wonderful to see the kids so excited to read!

Heard Around the Stacks
Blog at WordPress.com.